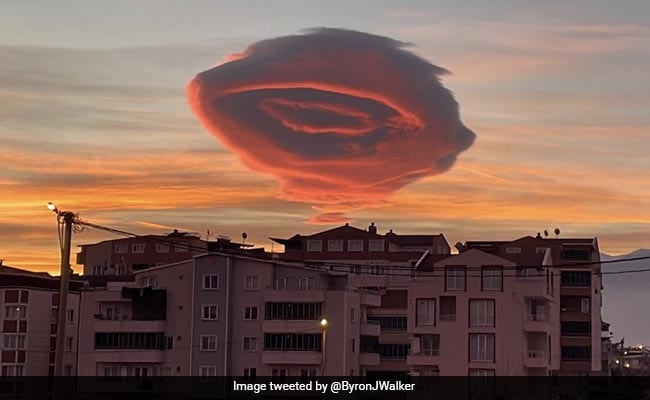 The videos and images of the bizarre-looking cloud have gone viral across the world.

A rare cloud formation resembling an unidentified flying object (UFO) was spotted floating over Bursa, Turkey, on Thursday morning. According to The Guardian, the almost circular cloud, known as a lenticular cloud, remained intact for about an hour. Several internet users captured the rare phenomena on their phones. It appeared at sunrise and featured a large hole in the middle.

“#Turkey an unusual dawn this morning. Footage of a rare natural phenomenon called #UFO lenticular/spying foehn clouds,” one user wrote while sharing images and video of the UFO-like cloud.

Take a look below:

The videos and images of the bizarre-looking cloud have gone viral across the world. Hundreds of social media users said that the cloud looked like a UFO. However, Turkey’s state Meteorological Serviced reportedly explained that the rare phenomenon was simply a “lenticular cloud”.

According to The Guardian, lenticular clouds are known for their curved, flying saucer-like appearance. They are usually found at heights between 2,000 and 5,000 meters.

As per Fox News, lenticular clouds are formed when the layer of the atmosphere is just on the cusp of saturation, meaning they are formed as a result of strong wind fluctuations over hills and mountains when the air is stable and moist. They most often form in winter, but it is still possible to see them at other times of the year.

These types of clouds can be a signal of precipitation within the next day or so as the atmosphere moistens ahead of the incoming storm.

In this case, a weak cold front was approaching western Turkey on Thursday. Bursa also lies at the base of a mountain range, which makes the phenomenon more likely.