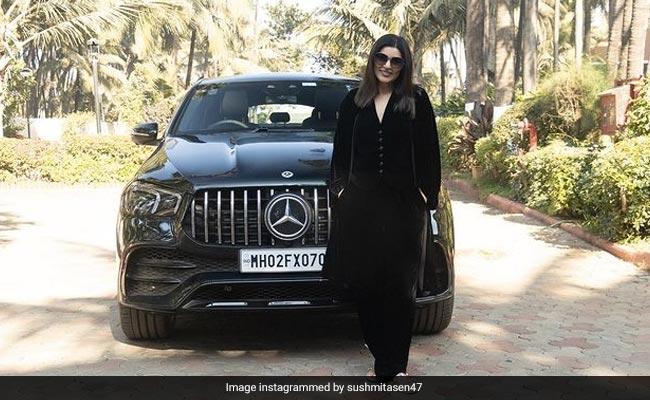 Former Miss Universe Sushmita Sen has a reason to celebrate. After all the actor just gifted herself a brand new Mercedes AMG GLE 53 Coupe (she mentioned in her caption). On Saturday afternoon, Sushmita Sen shared a couple of pictures of herself along with her swanky new purchase and she wrote in her caption: “Beauty and the Beast.” She added, “#yourstruly #officialpicture love love love.” Before that, the actress shared a video of her trying out the new car and she wrote: “And the woman who loves to drive… gifts herself this powerful beauty.” She added the hashtags #Sharing, #newride #gle53amgcoupe and #celebrateyourself to the post. She signed off the post with these words: “I love you guys.” In the comments section, her brother Rajeev Sen wrote: “Congratulations.”

The actress shared a video of herself with the car. Take a look:

The actress is busy with the shooting of Aarya 3 these days. On her Instagram, she shared a video of herself getting ready and she wrote: “Aarya 3 zone. With the Masters at work Ms Sen is Zen. I love you guys Have a beautiful day.”

Sushmita Sen is best-known for starring in movies like Biwi No 1, Do Knot Disturb, Main Hoon Na, Maine Pyaar Kyun Kiya and Tumko Na Bhool Paayenge and No Problem. She made her acting comeback with the International Emmy-nominated series Aarya and also starred in the second installment of the show.

Sushmita Sen, a former Miss Universe, is a single mom to daughter Alisah – Sushmita adopted Renee in 2000 while Alisah joined the family in 2010. Renee made her acting debut with a short film.